Family Business operating for over 25 years
with venues conveniently located across the
Perth Metro area.

Tennis Lessons Perth » About Us 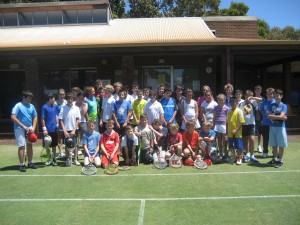 Although he loves playing the game, Peter’s real passion is coaching. He has now been coaching for over 25 years and holds a range of coaching qualifications including Tennis Australia Certification and is a TCA Qualified Advanced Coach as well as a Tennis Australia Club Professional Coach. His tennis experience includes time in Europe where he played on the European circuit and coached predominately in France and Germany.

Peter is particularly proud of his junior tennis coaching programs and takes great pleasure in seeing newcomers to the game develop their skills and share in his great enjoyment of the game.

Tennis Lessons Perth has always been family orientated and Peter’s wife Cassandra, a qualified tennis coach herself, is also involved in the day to day running of the business. In fact, if Tennis Lessons Perth had a motto, it would be “be parent friendly”. Both Peter and Cassandra understand that parents are busy and will always endeavour to provide a program to suit individual requirements and circumstances.

More than anything else though, Peter believes that tennis is a game to be enjoyed and has designed his coaching programs to reflect that philosophy. No matter what your gender, age or level of ability, Tennis Lessons Perth has a program that will maximise your tennis skills in a fun and relaxed environment.

"My son has been learning Tennis from Peter for over three years now. We happily travel 22km every Saturday and have never once heard the 'I don't want to go to sport today' comment! We could have used a tennis school closer to home and did try a couple, but we found the kids were standing still, waiting their turn a lot and became bored Peter's lessons keep the kids moving the whole time and they change courts to practice skills with different coaches. Whilst they do get put into appropriate groups, they also get to play with kids slightly above and below their own level which is really good for them. Parents are welcome to spectate and enjoy a quiet morning watching the kids while they have their coffee. The kids particularly enjoy the party and trophy day at the end of term. The best part for me though, is that the tennis term is always within the school term so there's no missing out on paid lessons when you go on family holidays." | Carrie, Hillarys
"I first attended tennis coaching not knowing the first thing about tennis. With the help of the friendly and knowledgeable coaches I am happy to have grown from a tennis bystander to a tennis player. As my skills and abilities are getting better the coaching I am receiving is advancing also. I would highly recommend Peter Gerrans Tennis Coaching to anyone interested in learning tennis, improving their game or just looking for a fun way to keep fit!" | Jaime Maddox
"Our association with Peter's Tennis is entering the fifth year and our son's enthusiasm to go to the club on Saturday morning has not dropped a bit. He makes friends there, he talks with us about the games , the completion days and looks forward to the clinic coaching during the school holiday. What more we could can ask for than seeing our son playing under the sun, or in the rains and breaming with laughs. We thank Pete for providing this opportunity and more importantly becoming one of them among the children. We are always amazed how he can remember so many kids' names. One can always learn about technical skills with any coach, but with Peter our son has learnt about other positive elements such as commitment, caring etc. above tennis." | Yar Chens
"Our children have been a part of Peter's Tennis School for many years. Our son Lachlan has grown within the holistic and fun (and of course fitness/technical/strategy knowledge) environment Peter and his coaches have provided for him. Tennis has been competing with many other sports within our son's life and Peter's handling of the clashing of these has been highly professional. His encouragement of not pushing too much too fast has been a key ingredient of the potential success Lachlan is now beginning to reap in his older teenage years. From a parents viewpoint, to have them with friends and occupied in healthy pursuits.... Peter's family values come out strongly within his overall coaching philosophies. The love of Tennis...says it all.

Lachlan has journeyed at the Leederville Tennis Club, through the beginners, pennants juniors and men's, tournament playing and is now a part of the State Academy. We would recommend Peter and his team, to any parent who is looking for a healthily sport environment for their child or children." | Dianne & Matthew Dempster
"To whom it may concern,
Our son Christos is now a tennis coach at the Peter Gerrans Tennis school. This is his part -time job whilst he is completing his Law/Arts degree at University. His love for tennis began at the age of eleven, when we first enrolled him for lessons at the Peter Gerran's tennis school, at the Leederville tennis club with Peter as his first tennis coach. He has since played in many pennants competitions, made lifelong friends and even won the coveted Leederville Championships award. My husband Bill and I often say the investment we have made in our son's tennis lessons have been completely worthwhile. We highly recommend Peter Gerran's and his Tennis school and thank Peter for the wonderful, positive influence he has had on our son Christos." | Bill and Eleni Evangel
[contact-form-7 404 "Not Found"]